Shionogi has adopted a Company with a Board of Auditors governance structure to support efficient management oversight. Under this system, the Group is working to strengthen the audit capabilities of its auditors and the monitoring functions of the Internal Control Department to ensure business execution is based on appropriate management decisions. In order to separate business management and business execution, the directors are responsible for making management decisions in line with the Group’s medium- and long-term plans, while the executive officers are responsible for implementing business strategy, resulting in business execution based on rapid and flexible decision-making. Half the Company’s directors are outside appointments, and we plan to enhance their supervisory functions further to reinforce management oversight. 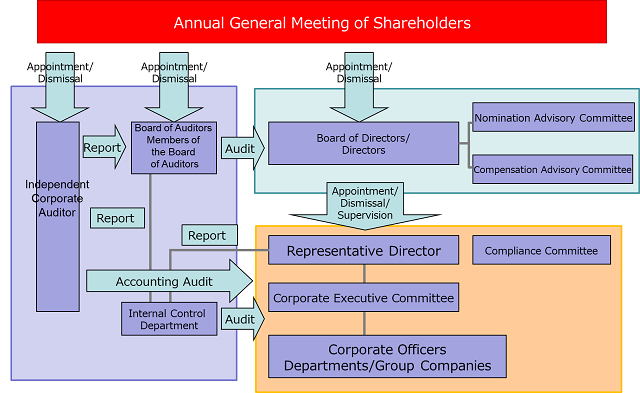 In principle, the Board of Directors meets every month to make decisions on important matters that affect Shionogi’s business and to oversee business execution. Aiming to strengthen the board’s oversight of business execution, we appointed two outside directors in fiscal 2009 and added another outside director in fiscal 2012 to promote highly transparent and equitable management by drawing on perspectives from outside the Company. In fiscal 2015, we appointed our first female director to the board and increased the number of directors to six in order to strengthen management further and promote diversity. All three outside directors are independent appointments and are tasked with ensuring accountability and a high level of transparency in management.

The Board of Directors is advised by the Nomination Advisory Committee and the Compensation Advisory Committee, which are chaired by outside directors. To ensure that management decisions are equitable and well-informed, these committees carefully assess the aptitude of candidates for director positions, the impact directors have on business management, and the suitability of individuals for certain roles and their respective levels of remuneration.

Attendance at meetings of the Board of Directors in fiscal 2019 was as follows.

Comprised of Keiichi Ando (Chairman), Teppei Mogi, Hiroshi Ozaki, Motozo Shiono and Isao Teshirogi, the Nomination Advisory Committee meets at least once a year to discuss the balance of skill of Board of Director (including Outside directors), enhancement of Administration Division, nomination of Corporate Officer in terms of acceleration of research and development and etc..

Auditors ensure Directors and Officers conduct their duties in a legally compliant and appropriate manner through business audit and accounting audit based on “Code of Audit and Supervisory Board Member Auditing Standards” in conjunction with feedback while attendance of Board of Director, Corporate executive meeting and important meeting.

The Board of Directors analyzed and evaluated its effectiveness in FY2019 by conducting questionnaires and interviews of individual directors and corporate auditors, with a focus on “6. Directors and the Board, (1) Framework, (3) Roles and

Responsibilities, and (6) Operation” in the Basic Views and Guidelines on Corporate Governance set by the Company.

The following is a summary of the results:

We assess that the Board of Directors has currently secured the necessary framework from the standpoint of various attributes, including expertise and experience, and diversity. However, issues for the future include the need to elect

directors of foreign nationality as well as successor candidates from the standpoint of further diversity and succession. The Board of Directors will consider ways to further strengthen the governance framework while taking the Company’s business development into account.

Reporting on and supervising of the status of management development were reported at meetings between outside directors and the president on a continuous basis to exchange opinions. We reported on the status of compliance activities twice a year and received opinions at the meetings of the Board of Directors. Issues for the future include discussions on the medium-term plan, further explanations and discussions of the selection process and development progression with respect to management development, and enhancement of the contents of reports on ESG. The Board of Directors will continue to consider ways to improve its roles and responsibilities.

Amount of Remuneration for Directors and Corporate Auditors

Total director remuneration is determined within limits set by resolution of the General Meeting of Shareholders. It encompasses base monthly remuneration, performance-linked bonuses determined by results for the fiscal year and other factors, and restricted stock compensation (medium-term performance linked and long-term) introduced in FY2018. Outside directors only receive base remuneration.

Stock-based compensation is awarded based on a grant table according to the director’s position and role. Medium-term performance-linked stock compensation is granted in order to further increase linkage with medium- to long-term performance, provide directors, excluding outside directors, an incentive to continuously increase corporate value, and to further promote shared values with shareholders.

Performance targets consist of net sales and operating income driven by new products and core businesses, return on equity, the growth rate of total shareholder return (TSR) at comparable companies, and other indicators. These targets are based on the assumption that the Company achieves its vision, which is to “grow sustainably as a drug discovery-based pharmaceutical company contributing to a more vigorous society through improved healthcare.”

Total corporate auditor remuneration is determined within limits set by resolution of the General Meeting of Shareholders. It encompasses base monthly remuneration.

Shionogi has established the Compensation Advisory Committee, of which an outside director serves as chairperson and outside directors comprise a majority of members, to advise the Board of Directors. The committee duly considers director and corporate auditor remuneration.

(Millions of yen, except for persons)