Shionogi emphasizes diversity and inclusion as a driving force of innovation.

It is essential to continue to create innovation for companies to continue to provide sustainable management and meet their social responsibilities. Shionogi & Co. Ltd. emphasizes that the creation of innovation is related to diversity and inclusion. We believe that respect for and integration of diverse values based on mutual efforts of employees lead to creating diverse innovation. This will enable us to make further contributions to patients and society and achieve sustainable development.
Accordingly, we focus on developing diverse human resources. Specifically, we have held the President’s Management Seminar, in which the President serves as a lecturer to train executives, and the Management Seminar, in which general managers serve as lecturers to develop executive candidates. We have also implemented various succession plans, including providing young leaders with the opportunity to improve themselves by learning from each other in a multifaceted manner in order to develop future executive candidates. We ensure the diversity of human resources and the sustainability of management through these various efforts to develop the next generation of leaders.
We also actively promote the empowerment of women in the workplace, as exhibited by an increasing rate of female managers. We expect that the sharing and integration of diverse values beyond gender differences will become a new driving force in creating innovation.
These various efforts made by us have been highly rated by external groups. In FY 2015, we were selected by the Ministry of Economy, Trade and Industry for the New Diversity Management Selection 100 project. We have also been certified as a Leading Company in Women's Advancement in Osaka City by the City of Osaka, in which our company is based.
As a company with diversity across age, gender, and race, we will strive to further integrate diverse values to continue to create innovation, and work to promote sustainable management to fulfil our social responsibility.

To achieve a work-life balance among our employees, we have engaged in improving their working environment by actively introducing a discretionary work system and a flex time system.
The rate of female employees who have taken childcare leave and have returned to work is almost 100%, and male employees who have taken childcare leave currently accounts for more than 20% of all male employees. We have also established various systems to recommend various ways of living of employees, including introducing a system that enables the sales staff to choose their work location according to life events, such as marriage and child rearing, a volunteer leave system, a leave system for bone marrow transplant donors, and a leave system for learning support.
Since 2005, we have formulated General Employer Action Plans based on the Act for Measures to Support the Development of the Next-Generation Children. We have worked to increase the acquisition rate of annual paid leave, pay for childcare leave, and support the personal development of employees during their absence from work. We have also held manager training seminars and have introduced a system for interviewing employees before and after their childcare leave. Consequently, we have been awarded the Kurumin mark, which is given to companies that support child rearing, three times, in 2013, 2015, and 2018.

Promoting the empowerment of women

At Shionogi, we are committed to providing employees with a work environment in which they can develop their strengths, express themselves as individuals, and develop professionally regardless of gender.
As a result of our initiatives to date, the ratio of female managers has been rising steadily and now stands at 10% in our domestic Group companies. With the male-female gap in average years of service also now closed (males 17.1 years, females 17.8 years), Shionogi is evolving into a company where it is considered only natural that women are active in the workplace.
In response to Japanese legislation for female empowerment, employers are required to publish relevant action plans.
In fiscal 2019, as part of our plan for the period April 1, 2019 to March 31, 2021, we set the goal of having at least 10% of managerial positions occupied by women by the end of fiscal 2020. Among other initiatives in our continuing support for women’s professional advancement, we plan to (1) conduct seminars and other educational activities on the subject of diversity company-wide (2) hold seminars on female career development for managerial staff (3) introduce a discretionary work system, a flextime system, and a homeworking system (4) look at measures to support employees returning to work from child-rearing leave, for instance provision of useful information during leave on a voluntary basis.

Creating a supportive workplace for people with disabilities

Shionogi is actively engaged in employing people with disabilities from the following perspective:
Since 2014, we have been working to create supportive work environments in which people with disabilities can develop their abilities. To create further employment opportunities, in April 2018 we established Shionogi Smile Heart Co., Ltd., which was certified as a special subsidiary company in July 2018.

The mission of Shionogi Smile Heart Co., Ltd. (* certified as a special subsidiary company in July 2018) is to hire and develop people with intellectual disabilities and allow them to become part of the company. Based on reasonable consideration for the characteristics of disabilities, the company aims to keep on growing slowly and operating its business at its own pace.

Meanwhile, under its independent corporate plan, it works to improve work quality and services and operate its business efficiently with a focus on cost saving. As a company that plays a part in promoting the CSR activities of the Shionogi Group, it will push forward with its business.

1. Creating routine tasks and working conditions suitable to the skills of people with intellectual disabilities

2. Creating a training system and a work environment for education and training in which people with intellectual disabilities can concentrate on acquiring skills necessary for tasks

Shionogi has rolled out initiatives to support employee career development and to promote female advancement in the Human Health Care Division. The thinking behind these and other initiatives is that supporting diverse human resources to develop their strengths will not only lead to personal growth but will also contribute to the growth of the organization. These efforts were recognized when Shionogi was selected for inclusion in the fiscal 2015 New Diversity Management Selection 100 project.

As a company that takes active measures to create a supportive work environment for women, Shionogi was certified in fiscal 2015 as a leading company for women’s advancement in Osaka City.

Shionogi has three times been awarded the Japanese Minister of Labour, Health and Welfare’s Kurumin Mark, which recognizes it as a company that supports child-rearing.

Shionogi Techno Advance Research, a Shionogi domestic Group company where around half of employees are women, aims to realize a work environment where women can continue energetically pursuing their career while coping with life’s milestones such as pregnancy, childbirth, child-rearing, and taking on career responsibilities. As part of these efforts — partly in response to a survey of workplace morale in fiscal 2016 — the company was inspired to set up a Women’s Advancement Promotion WT, whose activities are led by employees. In December 2017, the company received Grade 3, the highest rating, in the ‘Eruboshi’ awards, which were set up under Japanese legislation for female empowerment. In May 2018, it was designated by Osaka Prefecture as an outstanding equal opportunities employer. 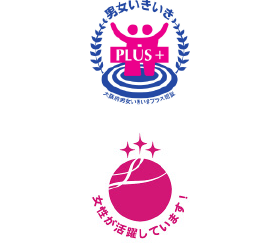